The scoop on auditions: mint chocolate or bubblegum?07 September 2020Next

Every Song Has A Memory: Won’t Get Fooled Again22 September 2020

I could be wrong, but I think people that cranked their tunes from a home stereo thirty-plus years ago, did it more often.

I remember first seeing a cassette carousel in the back of a radio station with an inch of dust on it.  At first glance, I thought it was an old cassette dubbing machine – the kind of thing you would use to copy a sales presentation for a client package or something.

The multi-cassette players of the 70’s & 80’s were one of those gawdy options that you rarely saw plugged into someone’s home stereo.

Gotta say, I worked within a large circle of radio people back in the day – a profession where someone being an audio geek/freak was basically a given – and I can never recall someone having one of these stacked and ready to play.

Wait a minute, there was a guy that did have one at his cottage.

The same guy who proudly displayed this 80’s bumper sticker…

Once at a Pawn shop, I saw the owner using a multi cassette player behind the counter.  He had it rigged up to his stereo for the store.  An amusing novelty you couldn’t help but stop and stare at.  The guy probably had half a dozen in stock and popped the “wanna buy it?” question whenever he saw someone really enthralled by it.

And there wasn’t just one version;

In 1970, Philips came out with a six cassette changer:

And who could forget the “Cassematic” by Denon:

or Panasonic’s supersized “20 Cassette”…er…uh…top seller from 1972:

While Pioneer sold a version that blended in with all your other components – to avoid people in your living room pointing and staring: 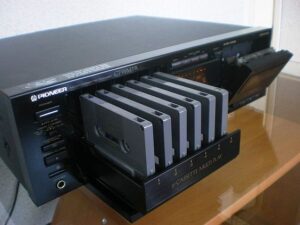 Nowadays, you can get your tunes hand picked by Alexa, Echo and a hundred other smart speakers.  But, like the record album, there was a special adventurous feeling you felt from walking through your music collection and physically pulling something out to listen to.