April without The Masters: golf’s surreal scenario11 April 2020Next 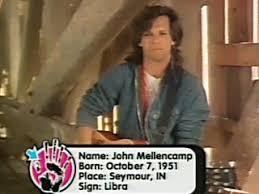 The first time I saw a pop-up video, I was hooked.  I even liked the “bloop” sound effect when the bubble emerged with the interesting trivia tidbits typed in.

Everything on social media nowadays is a pop-up video.  Everything is closed captioned.  Not so much for the hearing impaired – as it was originally intended – but for viewers that cannot be bothered to take the volume off mute on their phones and smart pads.

The world just wants you to look at the screen and follow along.

“Oh, and it would be huge if you could ‘like’ and ‘subscribe’ too.  And a 5 star rating as well would be great.  Much appreciated.”

Pop-Up Video debuted in 1996 on VH1.  As a radio jock, I watched  and jotted down many of the interesting facts that sprung up in the videos.  For me, it was a half hour of easy show prep:

I remember that one popping up…

Below, is a video I put together that was inspired by the good ol’ Pop-Up video.  Learn about the songs and artists that were climbing up the charts forty five years ago during the month of April in 1975.

Don’t worry about liking, subscribing or rating it.  I would be interested to know if any of the facts in the video were unknown to you – or amusing.