Every Song Has A Memory: Da Da Da

Every Song Has A Memory: You Belong To The City05 June 2020Next

Every Song Has A Memory: Da Da Da 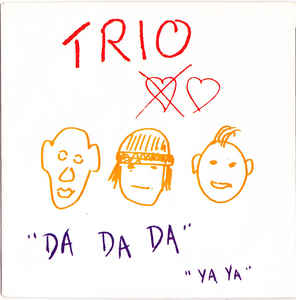 It’s late at night.  I’m a teenager in the early 1980’s walking alone in downtown Winnipeg.  I had stayed after hours at a radio station in order to gain access to a production studio to work on honing my skills as an audio producer and announcer.

Feeling hungry, I took the advice of a late night DJ and walked a short distance to an underground mall that had recently opened nearby.  Named “Winnipeg Square,”  it is located directly underneath the city’s famous intersection of Portage & Main – known across the country as “the coldest and windiest street corner in Canada.”

Constructed primarily to eliminate pedestrian traffic across the giant eight lane intersection, it actually takes you three times longer to cross the street via the sub-terrain route.  And for the majority of people forced to make their way to the other side on a -30 below day (when exposed skin freezes in less than a minute) it became a welcomed alternative. 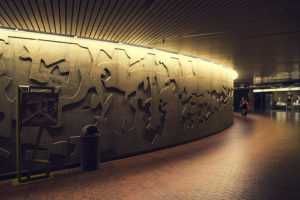 Walking down the steps and into the concourse in the dead of night felt somewhat spooky.  I started to lose reception in my tiny blue transistor radio with the earbud.  I saw no one except for a lone janitor quietly mopping the floor back and forth.   As he glanced up at me, I tried to come off looking like I knew where I was going.

The concourse is a dimly lit cavern of connecting entrances and exits that winds around in a circle and shoots off in different directions.  When you walk the underground loop, you start to lose a sense of direction.   As I hustled around the never ending corridor, all I could see was store after store – dark and locked – with giant sliding wire mesh security gates protecting their entrances.

I remember starting to feel unsafe.  Like I was lost in a labyrinth with something lurking around the corner that I didn’t want to meet up with.

Just when I thought of backtracking double time to try and find my way out, I came across the one lone business that wasn’t closed.  Lights were on.  The giant sliding wire mesh security gate was pulled open!

I had arrived at an Automat.

I didn’t have any change.  No problem.  The automated change dispenser was waiting to convert my three dollars into quarters.  Beverages.  Snacks.  Hot meals.  It was all here!

Automats have been around for over a century.  The unattended eateries were the early forerunners of the self-serve business model our world exists in today.  There was a time when Automats were all the rage.  Not because of the speed and convenience from selecting, paying and retrieving your food all in one fell swoop, but because of the novelty of a machine (and not a human) catering to your hungry needs.  Domo arigato, Mr. Roboto. 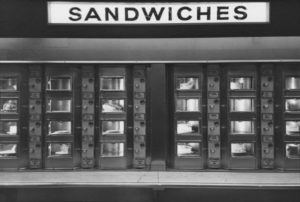 I looked at the uh…menu.  A simple can of Coke and a prefab ham and cheese sandwich would suffice.  The lettuce between the meat and cheese still looked fresh – the great determining factor when selecting a sandwich that comes in its own plastic compartment.

As I unwrapped the food and took a sip of my drink, I stepped to different parts of the Automat to improve the fuzzy reception of my radio.  I started to hear the simple repetitive plunking of a musical keyboard and a singer chanting the words “Da Da Da.”  The 1982 hit from the group “Trio” was just a few months old, and oddly gelled with the surreal moment I was experiencing.  I paused, took a bite of my sandwich and stared at the automated machines that seemed to stare back at me.

The monotonous tune with an Orwellian feel bounced in my head.  It became an earworm that stuck with me for the rest of the evening.

I hadn’t heard the song in years until a retro music channel featured it a while ago.  I was instantly thrown back into the dark depths of the underground concourse, and the feeling of what it was like being a teenager dining on my first (and last?) Automat meal.

With the current Covid 19 pandemic, the emphasis put on social distancing and a virus free environment, I wonder if the Automat will make a 21st century return to its former glory?  What menu options would be available today?  Red Bull?  Something with avocado?  Turkey bacon wasn’t invented until the 90’s.   A fruit roll-up…gigantic Gummy Bears…