Every Song Has A Memory: Afternoon Delight

Every Song Has A Memory: Electric Avenue07 July 2020Next

Every Song Has A Memory: Afternoon Delight 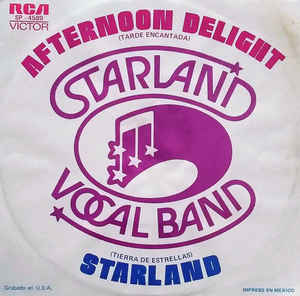 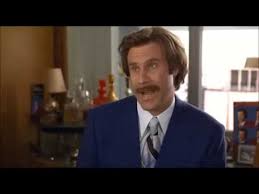 I stop for a moment to catch Will Ferrell as Ron Burgundy in “Anchorman” harmonizing the 70’s silly softy “Afternoon Delight” with his cronies.

For a moment – that never seems to last long enough – I was back in my neighborhood park where I spent many an afternoon with my childhood friends.  The park was a twenty second bicycle ride away.  Or a sixty second walk.  It was just – over there.

Not unlike most parks in the sixties & seventies built with kids in mind, “my” park had the usual attractions:  sandbox, swing set, a metal slide and a teeter totter.   There was an added bonus;  a huge concrete sewer pipe partially embedded in the ground.  A perfect place to escape a sudden rain shower.  There was enough open grass to comfortably whack a golf ball , play football, fly a kite or try out that new rubber band balsa wood plane you bought with your weekly allowance. 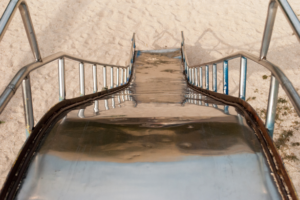 And then, there was the park’s showcased feature:  An object that made it different from any park I had seen.  To this day it still sits proudly in its place, dwarfing everything around it in size.  The mowed grass field and pedestrian pathways encircle it.

Rumor has it years ago, the city built a temporary rail line right in to the park to move the monstrosity to its new permanent home.

The numbers painted on its side have stayed with me in the same way you can still remember the family telephone number you had as a kid. 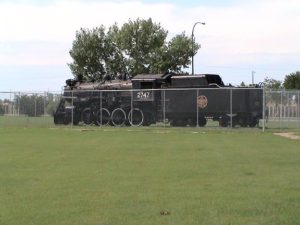 2747.  A real train.  Right here.  A steam engine!  The kind of train you saw in old black and white movies with a bell and smokestack in the front and a coal car in the rear.

It was the first steam engine built in Western Canada.  A high fence surrounded the black “gazillion ton” beast of machinery indicating you could stare but not touch.  Oh, how we wanted to crawl inside.

I must have been ten years old when word quietly got around that someone had pulled up part of the very bottom of the chain link fence –  enough so that you could crawl under and climb aboard 2747. 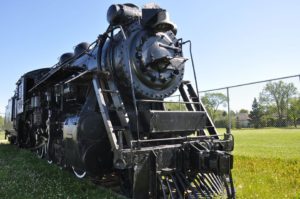 This was a major covert operation in the works.  A daring daytime maneuver that required stealth and an accomplice.  Backyards hugged the east and south sides of the park where any home owner could plainly see two ten year old’s ignoring the “No Trespassing” sign and making their way aboard the neighborhood treasure.

I remember walking into the park with my friend Glen, noticing just a couple of kids playing in the sand box.  No problem, the kids were a few years younger than us – no threat there.

Then, just when we thought the coast was clear, we heard the melody and lyrics:

Rats!  Someone’s in their backyard playin’ the radio.

Sure enough, right over there – “grown ups” working on their yard.  Oh well, we’d have to chance it.  Acting innocent and nonchalant,  we wiggled under the fence, minced across the gravel bed and climbed up the locomotive ladder.

Wow.  Just wow.  It even smelled like a train.  Still in the coal car, black fragments of the stuff it used for fuel – along with a few cigarette butts and a couple of broken beer bottles.  Obviously, the pulled up fence had been the work of older kids – probably fourteen or fifteen in age.  Glen and I wondered who they were, and if our older sisters knew them?  Who was bad ass enough to have pulled this off?

A few more daring trips on the train, a few more years under our belt and the novelty had worn off.  Climbing on the train had all of a sudden become “something kids did.”

I’m proud to say I was one of those kids.

Whenever I hear that hokey one hit wonder from the Starland Vocal Band, I can’t help but think of the summer days I spent hackin’ around with my friends at Train Park.  It’s a wonderful gift to be able to feel like a kid again – even if it’s just for the length of a song.