Every Song Has A Memory: Pac-Man Fever

Every Song Has A Memory: Afternoon Delight14 July 2020Next

Every Song Has A Memory: Pac-Man Fever 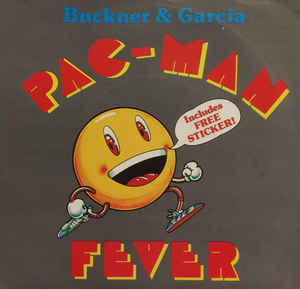 The coin-operated video game explosion of the 1980’s was literally a ‘game changer’ with how kids spent their free time (and their money.)

Pinball machines feverishly tried to keep pace.  By 1980 their domination as the “game of choice” had ended.  Arcades had moved to stocking coin-operated video games.  Kids were now more likely to use pinball machines as a place to lay their coats and backpacks on, rather than slip a quarter into.

In the beginning – we’re talking 1978 or so – video games leaned more toward attracting boys than girls.  Asteroids, Space Invaders and Galaxion.  There were only a handful to choose from. 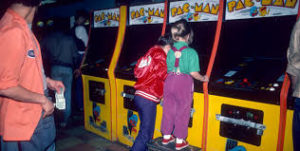 Now, just as many girls as guys stood around each other, watching the screen and waiting for a chance to have a go at the gobbling maze.

Pac-Mania had spread throughout the land. 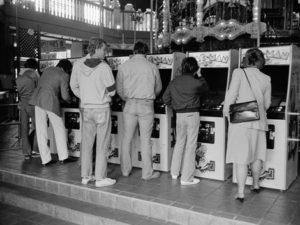 The world was living through a Pac-Mandemic. 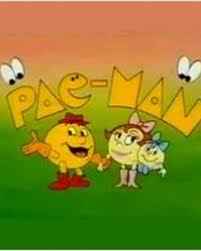 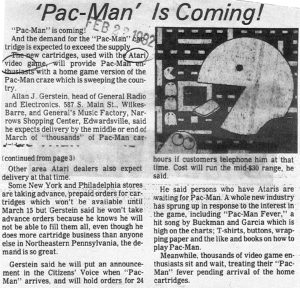 This is where my story powers up.

During the spring of 1982, I was a teenager working part time at a radio station and was offered a chance to work an upcoming promotion through the summer months.  It was a paid job, and all I had to do was go to shopping malls and events and hand out prizes to throngs of kids.  The promotions director mentioned I would be provided with a new sweatsuit to wear and I would have a hostess to help me.

“What are we giving away?” I asked.

Sure enough, on the first day of the promotion, all the prizing was laid out, plus a plastic bag with my name on it.  I opened the bag.  Inside, matching cotton sweat pants and a sweatshirt.

They were bright yellow.

“Okayyy.  Not really my color, but whatever,”  I thought.  I shut the door and stripped to my gitch, putting on the bright and baggy jogger outfit.

A man – whom I had never met before – opened the door and pulled in an enormous yellow round thing, covered in fur.  He rolled it toward me.

I was staring at a gigantic Pac-Man coming my way.

The black, nylon mouth gaped open as it came to a stop.  A pair of fuzzy gloves were tossed my way.

“Here, try it on.  Set the straps.” the man instructed.

Inside, a lightweight aluminum steel cage was molded as the Pac-Man skeleton.  A nylon harness was attached.  I wriggled in and tightened the straps.

I swiveled and bobbed, sticking my arms out of the small holes on each side.  I felt a little slow on the uptake, but it was now sinking in with what I had agreed to do for the rest of the summer.

As I walked out of the station, giggles and cackles followed me.  The little man with the dark curly hair and overgrown mustache guided me to the parking lot and instructed me to climb onto an open jeep.  My freckled faced hostess – a girl not much older than me – was waiting in the passenger seat.  I climbed in the back, wedging the furry frame down.

Looks and stares followed us as we coasted through traffic with people pointing and laughing.

“This is fun!” I thought, waving back to people and giving non-stop “thumbs ups.”  Pac-Man fever, baby!

The mood slightly changed when a couple of guys pulled up beside us in their half-ton truck and glared.  They wolf whistled at my attractive hostess.  As the light changed, the greasy looking young buck in the passenger seat deeply inhaled through his nose and hacked out a phlegm loogie that landed in my yellow fur.  The hostess stared in disgust as she opened up her purse and searched for a Kleenex.

I was a teenage Pac-Man mascot. 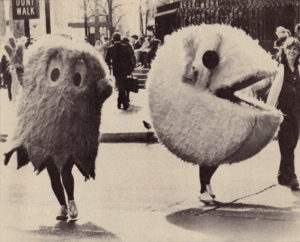 My summer days were filled with trips to the mall and outdoor events, high-fiving kids and watching them try to stick their head in the giant black mouth – which was my way of seeing out of the furry contraption.  Everywhere I went I would hear kids ask the same thing:

White sneakers, baggy yellow sweats and a couple of furry red gloves was all they had to go on.

I was getting used to being horded by children whenever I appeared in the “get-up.”  Hit the mall, shake some hands, pose for a picture or two, give away the prizes, get in the jeep.

Then, one afternoon, the unthinkable happened.

As we were travelling in the jeep on a warm and windy day, the promo guy decided to take a stretch of highway to bypass heavy traffic.  When the jeep began to accelerate to 90 kms per hour, I could feel the Pac-Man begin to lift off me.  I struggled to keep it under control.  With the wind whistling and the music blaring through the radio, no one heard my muffled cry:

Up it went – into the air.  A wind gust yanked it off my harness.  I twisted my head around and watched in fascination as the animated furry yellow orb hung up in the gust and floated behind us.  I have a clear recollection of the look of horror on a woman’s face who was following in a car behind us.

The giant Pac-Man pounced right on her windshield, ricocheted off and up in the air again, finally coming to rest of the side of the highway.  Pac-Man was down.  Tilted.  Out of service.

I jerry-rigged the harness, wiped mud from its fur and tried to straighten out the dent as best I could.  Pac-Man never took to the highway again. 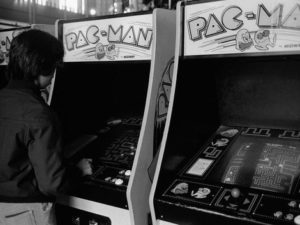 Pac-Man turned out to be the biggest selling coin-operated video game of all time.  Within a few years, the cereal and pasta was off the shelves, coin-operated arcades were a shadow of what they once were in popularity, and a new generation of kids were now at home playing the maze games and hitting high scores on their Atari and Nintendo home video game systems.

The era of a teenager hopping the bus to the video arcade with a roll of quarters, had faded.

I don’t have a copy of Buckner and Garcia’s novelty hit “Pac-Man Fever.”  It’s one of those songs that you kind of snicker and wince at when you see the title.

But when I see the Pac-Man – wherever that may be – the lyrics and melody immediately come to mind.  And I think about a time when the world went wild for the yellow dot that gobbled up quarters by the mouthful.