Every Song Has A Memory: Takin’ Care Of Business

Lose the Headphones04 May 2020Next

Every Song Has A Memory: Takin’ Care Of Business 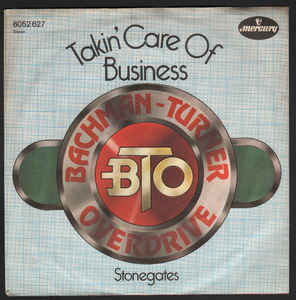 The song has always had an anthem-like quality to it.  The phrase is so powerful and meaningful, Elvis Presley had belt buckles, rings & necklaces inscribed with the letters “TCB” on them.  His touring band in 1970 was dubbed “The TCB Band.”

When Randy Bachman and BTO climbed  the charts in 1974 with the song, it got heavy airplay worldwide and its three chord riff has become instantly recognizable.

I had played the song hundreds of times on the air.  If anything, it reminded me of my roots, growing up in Winnipeg.

Although BTO was based out of Vancouver, we all knew the band were the boys from Winnipeg: Randy, his younger brother Robbie Bachman and Fred Turner.  (Guitarist Blair Thornton was the Vancouver connection in the band)

In the early 1970’s, Randy moved his musical home base from the prairies to the west coast.

It’s May of 1994.  The song is now twenty years old.  Office Depot had decided to use the song in a new marketing campaign.  You might remember the TV/Radio commercials using the tune to promote their products and services.  Not that the song needed it, but there was a sudden resurgence in popularity with the classic Canadian hit.

The organizers of Vancouver’s Music West festival had an idea:  trying to set a world record with gathering 555 guitarists together and simultaneously playing “Takin Care Of Business” for 66 minutes non-stop.  Offically, this would break the existing record set by 532 guitarists that played ‘Shake Rattle and Roll’ in Santa Cruz, Califronia back in April 1990.

I recall it was a Sunday, and I was into the last hour of my CFOX Sunday Brunch show.  We had been talking about the event on the air – inviting listeners to come down to Robson Square and help Randy set a Guinness World Record.  A bunch of the jocks from the station decided to make the trek downtown on the Sunday and join in.  All you needed to be part of this wacky and wonderful spectacle was a guitar.

And then it hit me: I had forgot my six string at home.

The station was just a few blocks from where the raging record setting event was taking place.  As some of the staff began arriving, one of our announcers – “Stormin’ Norman” Casler – popped his head in the control room to say hello:

I had to confess that I was without an instrument – but would walk down with them to take it in.

“There’s a shitty one with only five strings in the music library – grab it!”

I gleefully trounced downstairs and brought up the hacked instrument with plastic strings.   I now felt whole and complete.  I wasn’t going to be some wannabe standing there watching hundreds of others sharing in this goofy glory. 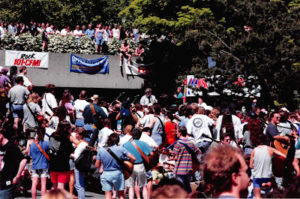 The square was packed.  Some guys had brought their electric guitars plugged into small amplifiers. Mom’s, Dad’s & kids were standing around strumming.  The official attendance?

Randy came out to greet everyone.  I remember the guitar he used was solid chrome!  A gift to Randy from the folks at Gibson.  His son Tal would play drums to help keep everyone in sync.

So we started up.  Randy showed us the three chords we would be repeating over and over again.  The stopwatch was pressed.  1322 guitarists began to play.  We were all takin’ care of business. 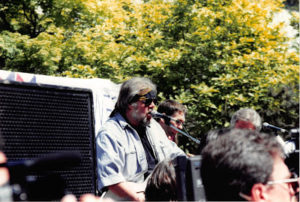 Over the next 68 minutes and twenty seconds, Randy treated us to some tasty solos and kept the crowd pumped, singing the song again and again and laughing with us as our fingers started turning numb.

When it was over, we had clocked in with an official Guinness World Record.

A couple of weeks later, a radio station in Florida tried to break it.  Only 400 showed up.  The record remained intact. 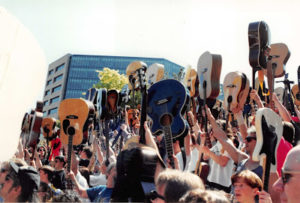 Whenever I hear that classic riff start up, I’m right back strumming that acoustic with five strings, standing with Randy Bachman and 1322 of his closest fans and friends.