Every Song Has A Memory: Doesn’t Remind Me

Every Song Has A Memory: Doesn’t Remind Me 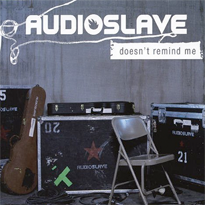 The deep maroon colored pavement on the highway was just one of the oddities that first caught my eye. 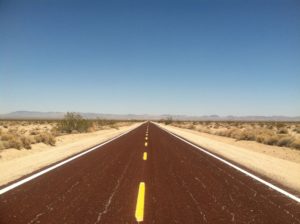 I had never traveled through the Mojave desert in California before.  Desolate.  Quiet.  Untouched.

Looking to my left, I saw the great sand dunes that swept up from the desert floor.  The closer I approached, the more I realized their true size in dimension.

It wasn’t a sand dune like in the movies that you could hike to the summit in a few minutes with a little effort – the dunes rose taller than most high rise buildings. 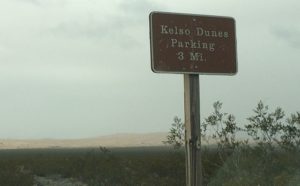 As I made the turnoff onto a gravel road that headed straight toward the natural phenomenon, a song came on the stereo that seemed to capture the surreal surroundings.

And I don’t know why.  Music is funny that way, sometimes.

But it fit.  I was in the middle of nowhere.  I had no memory of a place or a moment in my life that I could compare it to.

And all I heard was the song with the repeating phrase:

“Cause it doesn’t remind me of anything.”

The Kelso Dunes in California has a lonely, windswept and majestic quality to them.  In an area known as “The Devils Playground” the prevailing winds carry sand, releasing it as the air current collides with the mountain range. 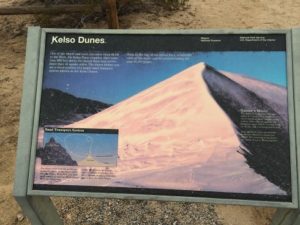 Over twenty five centuries, sand grains have collected to form massive dunes.  It’s a thirty minute hike from the parking lot to the base of the dunes.  After about ten minutes of trekking, the desert floor gets more difficult to walk as the sand deepens.  You feel like you’re taking a step back for every two steps you walk.  If you’re game,  you can ascend in ankle deep sand up the 600 foot dunes – about the height of a 40 story building.

But it’s worth it. 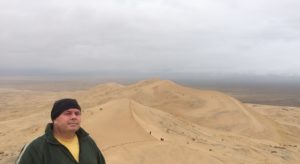 You stand at the summit and take in the incredible desert vista.  Hikers appear as specs on the dunes.  “Booms” can be heard coming from sheets of sand breaking away from the crest and rubbing against the stationary sand as they shower down from the peak.  The sound isn’t frightening, it’s mystical to the ear.  Unlike anything I’ve ever heard.

Again, it doesn’t remind me of anything.

I will always have a moment in my life that reminds me of listening to the haunting voice of Chris Cornell singing.  The song will forever take me back to the desert and the dunes that are somewhere in the middle of nowhere.