Every Song Has A Memory: 19

The scoop on auditions: mint chocolate or bubblegum?07 September 2020

Every Song Has A Memory: 19 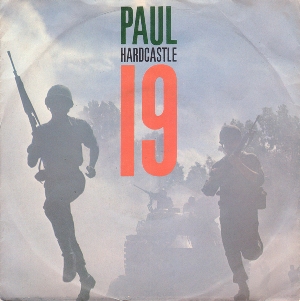 “Were you involved in combat?”  I quietly asked.

There was a long silence.  I watched the operator push buttons and pull levers. 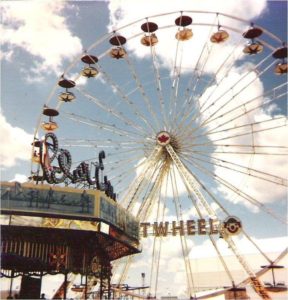 The Ferris wheel slowly came to a complete stop.  Patrons on the ride began climbing out of the tubs and walking down the orange wooden ramp, exiting the ride.

He pointed to a tub on the ride marked #5. It was the last tub still low enough to the ground to be able to load paid customers eagerly waiting to take a spin .

I only knew him by his nickname, “Buffy.”  He was the foreman of The Giant Wheel ride.  It was July of 1988, and I was a couple of days into doing a crazy stunt with a radio station: living on a Ferris Wheel 24 hours a day for ten straight days at the Calgary Stampede – broadcasting live on the air to raise money and toys for the Children’s Hospital.

Tub#1 on the Giant Wheel was my cramped, yet cozy home.

Buffy, was a longtime fixture working the shows.  A legend around the crews that ran amusement rides; setting up the 110 foot “jewel” of the midway in one city – tearing it down, hauling it across the country – setting it up in another. 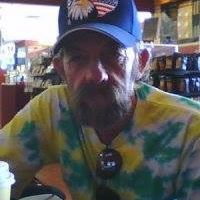 He was a slight looking guy by size, maybe all of 5’6 or 5’7 who weighed no more than a buck-thirty.  His unshaven, dark-tanned weathered face made him look a lot older than he was, which at the time I guessed to be about forty.

But you could tell he was tough.  Tough as nails.  One afternoon as I sat spinning around and around on the wheel, I watched a worker try to loosen a giant bolt on a piece of machinery that was being repaired.  The guy looked big; a young muscle-bound dude whom you wouldn’t want to mess with.  After he tried for what seemed like forever, Buffy walked over.  Moving him aside with a gesture of his arm, he grabbed the long hammer wrench and reefed on it with a grunt.

The muscle bound dude was left scratching his head as Buffy walked away without saying a word. 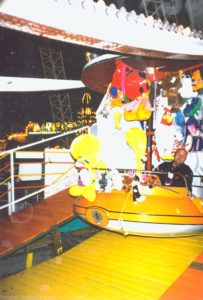 Every now and again, Buffy would jump on the ride with me, taking a spin for a few minutes and have a cigarette.  We talked about the shows, the other cities and fairs, and music.  I told him he and his thick horseshoe mustache reminded me of guitarist Jeff “Skunk” Baxter from the Doobie Brothers and Steely Dan.  He said he liked both of those bands, but country music was his favorite. 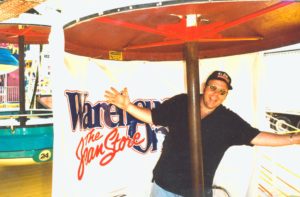 One night, after the crowds had left the fair and the ride had shut down,  we shared a few beers.  As we sat on a couple of lawn chairs on the pavement – just off the ride, we took in the silence of the fairgrounds and watched the large rides on the midway slowly power down and shut off their lights.

Out from the pocket of his red jacket came a photo that looked like it had been carried around for many years.  It had a few creases and the corners were bent.  He leaned forward and passed it to me.

“That’s me in Florida with The Wheel when it was brand new.”

The photo captured a younger Buffy with his aviator glasses on and a ball cap with a red, white and blue patch of the American stars and stripes.  In the reflection of his mirrored shades, the Giant Wheel sat with a bight blue sky and clouds behind it.

It was a perfect shot.

“They wouldn’t use it because I’m a Vietnam veteran.” he replied.

I could see his eyes begin to well up as he stared down at the pavement, popping a dent back in and out of his beer can.

Seems a newspaper photographer had taken the shot, and the picture had made it on the front page.  Someone wanted to use it to promote an Exhibition somewhere in Florida.  Whoever made that call, decided to investigate the person in the photo.  This was the mid 1970’s.  Saigon had fallen to North Vietnam.  The war was still a very bitter and touchy subject to many (and still is).  Apparently, someone had a major political issue with featuring a veteran in a photo promoting the fair.  Buffy found out.  After that, he shut down about his tour of duty, and stayed silent whenever the subject came up.

That evening, we talked about his service, and the poor treatment he received on his return.  I was 22 at the time.  I thought what it must have been like to be my age and be called to go to war.  In the 80’s, a lot of information started coming out about the Vietnam war.  Movies like “Rambo” “Platoon” “Full Metal Jacket” “Hamburger Hill” and “Casualties of War” hit the screen.  Shows like “China Beach” and “Tour of Duty” were on TV.  There was still opposition to the Vietnam War Memorial Wall in Washington D.C. that had been unveiled in 1982.

And then, there is that chilling “documentary” dance hit that came out in 1985 – the narrator, rattling off disturbing facts and figures about the Vietnam war and raising its awareness with a younger generation (my generation). 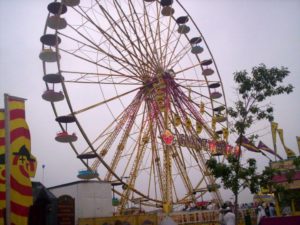 Nowadays, when I hear the skipping vocals of “n-n-n-Nineteen” I think about sitting on the Giant Wheel and the conversations I had with the Vietnam veteran who befriended me.

Honor and respect are two words that also come to mind.